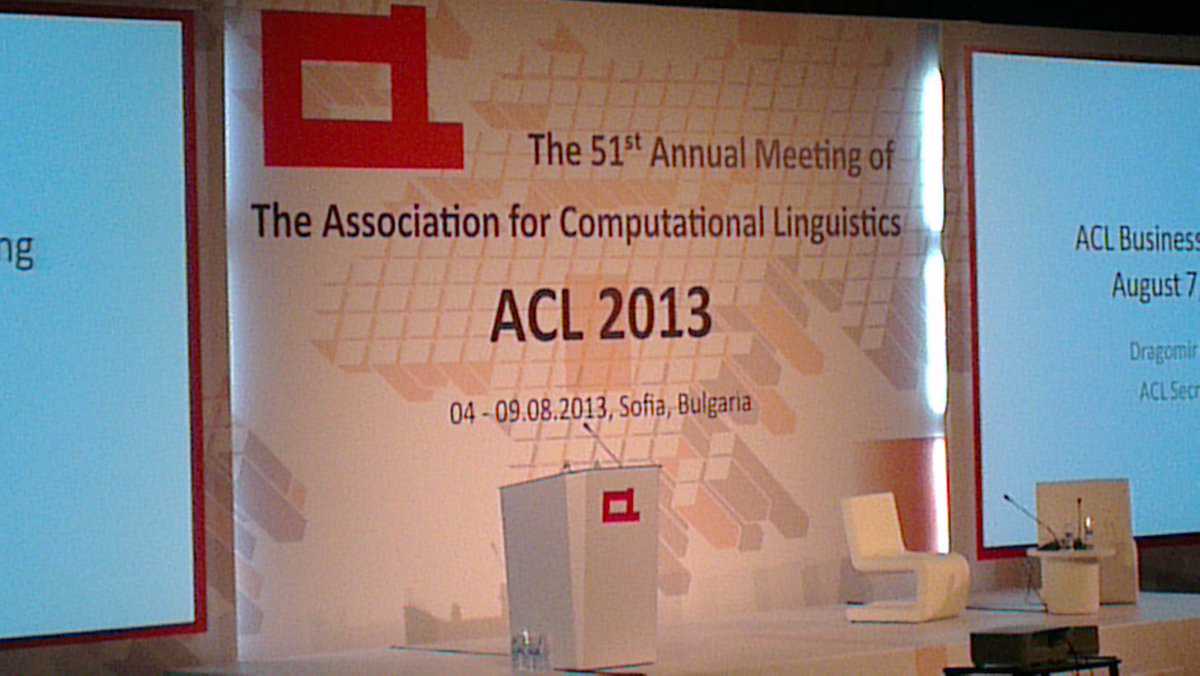 This morning’s keynote was given by Assistant Professor in the Department of Psychology at University of Washington, Dr. Chantel Prat. She focuses mostly into cognitive science. The most interesting part of her presentation I think it was a comparison of monolinguals and bilinguals at problem solving. Her findings show that bilinguals perform better on solving novel tasks. But, when both groups of test subjects were tested on already known tasks, the performance of bilinguals remained the same, while the monolinguals improved their performance and achieved the same results as bilinguals.

During the coffee break I visited the Maluuba stand (http://www.maluuba.com/). They are developing an application similar to Siri and Google Now. They began to develop their product at the same time as the big players, but there are only 25 of them and their product will be integrated into mobile phone systems, TVs, etc. Their focus at ACL is to find new people that would do research for them. I also said hi to the Google people. On monday I already spoke to them and got that nice red glasses :), but today I solved their simple “Research quiz” and got Google bottle – now I obviously need to go running tomorrow morning as I have full equipment with me. Btw, did you know that Google Researchers produce more than 300+ scientific publications per year? 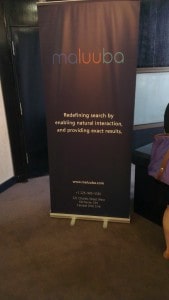 In the first session I attended to A Bayesian Model for Joint Unsupervised Induction of Sentiment, Aspect and Discourse Representations by Angeliki Lazaridou, Ivan Titov and Caroline Sporleder, Joint Inference for Fine-grained Opinion Extraction by Bishan Yang and Claire Cardie and Linguistic Models for Analyzing and Detecting Biased Language by Marta Recasens, Cristian Danescu-Niculescu-Mizil and Dan Jurafsky.

After lunch there was the ACL Business Meeting, where some facts about the conference were introduced. At this year’s ACL there were 987 registrations. There is only one researchers from Slovenia, who is ACL member – I suppose this is Tomaž Erjavec or Darja Fišer. After, there were 15 talks about ACL organization, changes, funding, events, similar conferences, journals, etc. The most of the talks were reports or presentations of similar conferences, where also ACL people cooperate – all of them had also been on my personal conference list.   For NAACL they exposed the problem of financing and this year they published all talks on the internet (http://techtalks.tv/naacl/2013) for free and replaced USB proceedings with iOS/Android application, which was a good decision. Then there was a report of EMNLP 2013 and an overview of EMNLP 2014 in Quatar. Others that were presented are IJCNLP 2013/2014, EACL 2014, Coling 2014, ACL-IJCNLP 2015 and IOLING (Internation Olympiad for Linguistics for secondary school). If you would like to coorganize or host the ACL 2016, you are invited to contact manning@stanford.edu.

The ACL also controls two journals. The new journal is Transactions of the Association for Computational Linguistics (http://www.transacl.org/), which has a submission deadline on the 1st of every month with a review period of 3 weeks. The paper can be accepted, accepted with changes (author needs to resubmit the paper within two monts), rejected with changes (author has possibility to resubmit after 3 to 6 months) and rejected. The novelty is also that these papers can be presented at NAACL or ACL conferences in the form of Paper, Poster or Talk.

The second journal they own is Computational Linguistics, which is one of the top journals in the field and has also a high SCI impact factor. They said that it takes about 2 months to receive first decision about the submitted paper.

The presentation was given by Ms. Li, who works at Disney. She presented their simple workflow TAD, which is able to determine if a specific word is ambiguous or not. Their major problem is to detect opinion about movies from Twitter. For example, the name Skyfall 007 is not ambiguous because if we search twitter with this query, almost all of the answers will be about the movie. But on the other hand, the title of Brave movie is very ambiguous as lots of results have no connection to the movie, e.g. “He is so brave, that …”.

They propose a system for opinion mining and present the problem as a sequence labeling. They try to improve classification of ideological debates. Their baseline systems are (Baseline 1): One classifier per each domain, SVM model, each training instance corresponds to a post, that can be positive or negative, feature types are: Basic – unigrams, Sentiment -dependencies, sentiment word counts, Argument – words in a post, (Baseline 2): They add author constraint to the Baseline 1. Further, they propose a system with two constraints: (1) Ideology Constraint (IC) – applicable for the same author, but for different domains. IC motivation: anti-abortion person is likely to be anti-Obama person. (2) User Interaction Constraint (UC): Regularities between interactions: a sequence of posts for which they use CRFs. They evaluated on 4 datasets: Abortions support, Gay rights, Obama support, Marijuana legalizations, and showed significant improvements over the baseline systems.

After this last session, the Lifetime Achievement Reward was given to Jerry Hobbs, who then had a very interesting talk about history and “future” of NLP. We may have some useful system “in the next 10 years”. With this event, the ACL 2013 finished and now the two days of workshops will begin.

For dinner I used Metro (btw., there is really nice and clean Metro in Sofia, uncomparable to some “famous” EU cities) to get to City Center Sofia. There I went to KFC and for a cheeseburger in MacDonald’s. If I define a cheeseburger as a one unit a person can eat and compare prices between Slovenia and Bulgaria, I can conclude that there are no significant differences. In Slovenia, 1 cheeseburger is 1 EUR and in Sofia 1 cheeseburger is 1,99BGN (=cca. 1EUR).

Now I need to make my presentation …