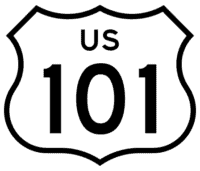 In June 2018 I went to Florida, Tampa and California, Palo Alto. In Tampa I was visiting the University of South Florida, where I was working together with prof. Glenn Smith on a joint research project. Related to the project I also visited Stanford University, Natural Language Processing group and Infolab, where a post-doc researcher Siva Reddy and Marinka Žitnik accepted me very warmly. During the stay in Palo Alto I had time for few getaways and also took a week off for a road trip. Below I quickly list places I visited, which can help others visiting the Bay area.

For travelling I did not need to have to use mobile data as there are many shops or Starbucks cafes where you can use a free wifi. I recommend to install Roadtrippers, where you can enter points of interest and plan the most efficient trip during the day. I used POIs from there as destinations in an offline navigation – HERE Maps works perfectly. Also, it is useful to have a Groupon application, where you can get some good deals – I got cheaper entrance fee for museums in San Diego, Warner Bros tickets and Computer history museum.

In Palo Alto I rented a car, which is more convenient if you stay longer. Of course you can also use Uber or Lyft. I was staying at my sister’s apartment and below I list places that are nice to visit in the area.

If you have a full day and a half you should visit San Francisco. It is better to have a sunny weather, which I did not have. Visiting from Palo Alto I would recomment to take the 101 Fwy in one way and 380 Fwy into another.

From Palo Alto this trip will take a a whole day.

For this trip I needed seven days – from 21st to 27th June 2018. The initial plan was also to visit the Sequoia Park but it would be too much, so I skipped it. If you have a day more, you should probably visit it. If you visit at least three national parks it is also cheaper for you to buy a full pass fee for all the California parks. 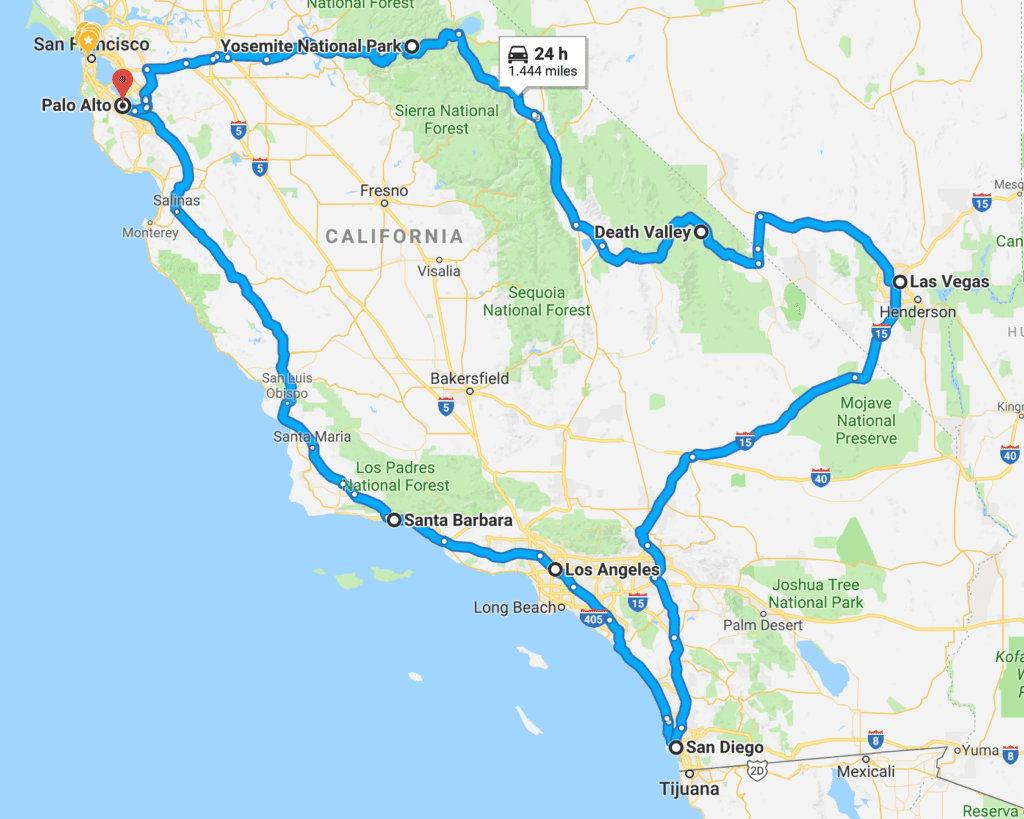 My first stop from Palo Alto was Santa Barbara, which really impressed me. I had a dinner at the Cold Spring Tavern, which is an old-fashioned tavern at the old road through the mountains (just 10 minutes from the city). On the way to Los Angeles I stopped in Thousand Oaks to find a place to sleep and the best price/performance in my opinion is to choose Motel 6. Comparing to other motels it has very nice and clean rooms without doors to neighbours. That is why I also mostly selected these motels further on the road.

I slept in Motel 6 – South El Monte in Los Angeles.

In the north I was buying groceries in Safeway but in the south area they have Vons. Probably one company took over another one as shops look the same. In these shops I especially liked self-service food that you can take and eat there. As there was still a lot to see in San Diego I slept at Motel 6 – Chula Vista.

On the way to Las Vegas I slept at Motel 6 – Barstow.

On the way to the Death Valley I slept in Best Western Pahrump Oasis.

As there were warnings about the temperatures in Death Valley I started my trip there in the morning. But until 2pm the max. was 44 degrees, which is two degrees less comparing to Las Vegas.

On the way to the Yosemite Park I slept in Motel 6 – Mammoth Lakes. At the time I was there a fire was happening few miles away and there was some smoke in the air. The city seemed nice, oriented into winter sports – in the hills there you could ski in the middle of June. There are also three lakes in the area – a drive around them will take you a half hour and are worth visiting.

The Yosemite Park is very scenic and worth visiting.

On the way back to Palo Alto I stopped for a coffee in Merced, which is a small city but I saw quite a lot of homeless men there – I do not know why so much.

As my final remarks I would say that I have seen many things and the nicest places are Santa Barbara (IMHO the best city of all the above), San Diego and Yosemite Valley. I was a bit disappointed about San Francisco – maybe also because of the cloudy weather or too big expectations.

Published in Free time and Travel