Yesterday, on monday the first lectures have began. At 9a.m. we first got our ids. Then I “outsourced” the printing of my poster to organization team at info-point ;).

After some coffee, the keynote of Nigel Shadbolt started. Nigel is a professor of Artificial Intelligence (AI) at the University of Southampton. As I had supposed before, Tim-Berners Lee and hid proposal of internet was mentioned. Then he presented the overview of the Information Extraction field as it is supposed to be for opening talks. His also introduced us his notion about the importance of people over algorithms we are forgetting about. The next big words I remember were that subfields of IR are not connected to traditional Artificial Intelligence, but may be better to say Augmented Intelligence.

As the keynote presentation is too big, you can retrieve it here: http://zitnik.si/temp/essir2011/01_NigelShatbolt_keynote.pdf

The next two-part lecture Foundations: Models and Methods was given by Hinrich Schuetze. He was one of the authors of the book Introduction to information retrieval which I read before writing my bachelor thesis. That is why I was very familiar with presentation. His presentations and links are also available on http://informationretrieval.org/essir2011. He lectured some introduction to Boolean model (he emphasized about feast or famine mostly), Vector model, Ranking (interesting was what is the sequence user looks at the results, that 30% users will click even the nonrelevant result, nicely presented difference between Euclidean and cosine similarity, pivot normalization, …), Probabilistic models, Language models and finally Learning to Rank. 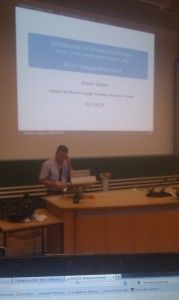 The las lecture was given by Vladimir Batagelj, the “godfather” of Pajek. He presented the program Pajek and many interesting properties of network analysis, which I’ve also heard about at his course on Large network analysis during my PhD study.

In the evening the beachvolley was planned but because of the wind we went to mexican restaurant Enchiliada. There Lars showed us some game with glasses (by that you may separate stupid and smart people – maybe :):), I successfully passed the test).

Before going back to hotel Sholz we needed to go to the German corner to take some pictures: 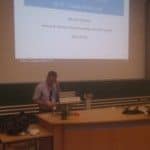 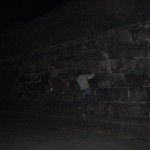 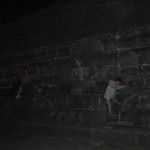 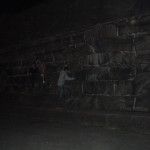 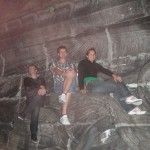